World Health Organization experts have named tobacco the number one global killer. Every 6 seconds, one more person in the world dies as a result of tobacco consumption, 600 people die every hour, 14,400 people die every day, and more than 5 million people die a year from diseases caused by tobacco smoking.

German scientists have calculated that each cigarette shortens life by 12 minutes. 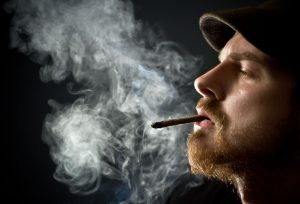 Research in the United States has shown that among a group of American boys who started smoking before age 15, tobacco is predicted to kill before they reach age 70, three times as many as drugs, homicide, suicide, AIDS, road traffic. – traffic accidents and alcohol, taken together (Petro R., 1996).

The most striking study on the effect of tobacco smoking on morbidity and life expectancy was published in 2005 – the results of observations of almost 35 thousand British doctors over 50 years. Among doctors who smoked, diseases of the heart, blood vessels, cancer of the lung and trachea, chronic obstructive pulmonary disease (COPD) were significantly more common, and the average life expectancy was 10 years less than among nonsmokers. By the time of publication of those 34 thousand 439 doctors, 5 thousand 900 people were still alive, and only 134 of them smoked.

Nicotine is an alkaloid contained in various types of tobacco and in some plants – in cotton wool, field horsetail, caustic stonecrop, and some types of lyre. Nicotine quickly spreads through the bloodstream, after 7 seconds it reaches the brain. The end product of metabolism is cotinine, the detection of which in blood, urine or saliva is a biomarker of smoking, including passive smoking.

Snus is a crushed, moisturized tobacco that is laid between the lip and gum.

The half-life of nicotine is 120 minutes, after 48 hours it is completely excreted from the body.

Tobacco smoke contains over 7000 chemical compounds, 40 of which are known carcinogens. For example, benzpyrene, a strong carcinogen, a substance of the first hazard class. Crotonic aldehyde is especially dangerous, toxic, and causes disturbances in the immune system. Acrolein is a component of tear gas. Formaldehyde, acetaldehyde are carcinogens. Pyridine – used in the manufacture of insect repellents. Lead – used in the manufacture of paints, batteries. Benzene is a carcinogen, organic solvent.

The electronic cigarette was invented in 2003 in Hong Kong for smoking in areas where it is prohibited. The US Department of Food and Drug Administration found diethylene glycol in the cartridges, which is part of antifreeze, and nitrosamine, a strong carcinogen.

Diseases associated with tobacco use with active smoking:

Diseases associated with tobacco use through secondhand smoke:

Chronic obstructive pulmonary disease (COPD) is a painful condition characterized by airflow restriction that is not completely reversible. Airflow restriction is usually progressive and is caused by an abnormal inflammatory response of the lung tissue to irritation with various pathogenic particles and gases (GOLD 2001, 2003).

Persons who live with smokers, work in the same room as smokers, or have to be near smokers for at least 2 hours a day are called passive smokers.

“One hour a day in the same room as a smoker increases the likelihood of a non-smoker developing lung cancer hundreds of times, which is more likely to result from living in a building containing asbestos for 20 years” (Sir Richard Dol, 1985. Asbestos completely banned in the EU countries since 2005).

Smoking has an antiestrogenic effect on the body, which leads to secondary infertility, a decrease in the effectiveness of hormone replacement therapy, and an earlier onset of menopause.

Tobacco use is a risk factor for erectile dysfunction.

Smoking https://en.wikipedia.org/wiki/Smoking during pregnancy is a risk factor for ectopic pregnancy (increased risk by a factor of 1.77), placental rupture (1.62), placenta previa (1.58), and intrauterine growth retardation (2.4). Tobacco smoking during pregnancy is the cause of premature birth in 15% of cases, low birth weight in 20-30% of cases, sudden infant death syndrome in 21% of cases, and the likelihood of developing bronchial asthma 1.8-1.9 times.

Having a vasoconstrictor effect on the blood vessels of the mother and the fetus, nicotine contributes to the development of chronic hypoxia, affects the central nervous system of the fetus, which increases the likelihood of sudden infant death syndrome, behavioral abnormalities in childhood and adolescence.