Cause of endometriosis: Cells similar to the lining of the uterus extend outside the uterus, become fixed and grow in other organs. 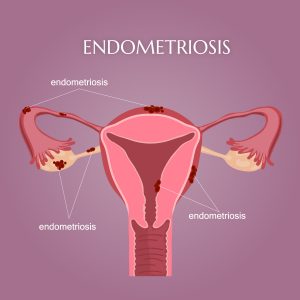 Endometriosis disease can occur for the following reasons:
Hereditary predisposition;
Congenital malformations;
A defect in the immune system;
Retrograde menstruation, i.e. the flow of menstrual blood with fragments of the mucous membrane of the uterus by reverse flow through the fallopian tubes into the abdominal cavity;
The spread of endometrial cells through the lymphatic, circulatory systems;
Impaired function of the immune, endocrine system in case of unfavorable factors.

According to statistics, only every 6th gynecologist, to whom a woman with pain in the lower abdomen turns, diagnoses “endometriosis”. This is due to the complexity of its diagnosis.

Diagnosis and treatment of endometriosis includes the following steps:
Consultation and examination by a gynecologist.
Ultrasound of the pelvic organs (uterus and appendages) or MRI.
A blood test for the presence of mutations in the genes responsible for the development of endometriosis.
A qualified geneticist, based on the results of the studies performed, will issue a conclusion with the interpretation of the results and recommendations:

the presence / absence of a genetic risk of developing endometriosis;
the estimated efficacy of drug therapy for endometriosis;
on the assessment of increased individual sensitivity with various exogenous risk factors for endometriosis;
recommendations for reducing risk factors.
A blood test for CA 125 antigen, which is a tumor marker of ovarian disease, but in endometriosis, it can also be increased. The cost of the analysis can be found in the section of blood tests Antigen CA 125
In some cases, a study of the immune system is indicated.

Medical treatment of Endometriosis can avoid surgery in the future, reduce the intensity of pain, and exclude relapses of the disease.

Drug treatment is aimed at suppressing the proliferation of endometrial cells. To suppress their activity, drugs are used that actively affect the hormonal background of a woman. Below we list the groups of drugs that are used in the treatment of endometriosis.

Medicines used to treat endometriosis can be divided into the following groups:

Synthetic progestogens
Combined hormonal contraceptives
Intrauterine releasing system “Mirena”
As already mentioned above, only your gynecologist is able to determine the treatment regimen and control the effect against the background of the treatment being carried out. Therefore, self-medication for endometriosis with hormonal drugs is contraindicated due to the many side effects of these drugs and the need to monitor the effectiveness of the treatment.

2) Treatment of endometriosis by surgery:
Laparotomy;
Laporoscopy.
It is used in case of a threat of infertility, according to indications of a worsening condition of the patient with an unfavorable prognosis.

Endometriosis https://en.wikipedia.org/wiki/Endometriosis is a fairly common disease, the disease progresses slowly, rare pains become chronic. Additionally, the difficulty in diagnosing Endometriosis sometimes leads to a delay between the first signs and the identification of Endometriosis. Therefore, the earlier the treatment of endometriosis is started, the faster the improvement in well-being occurs and it is possible to avoid serious consequences in the future.

Be attentive to your health, dear women!